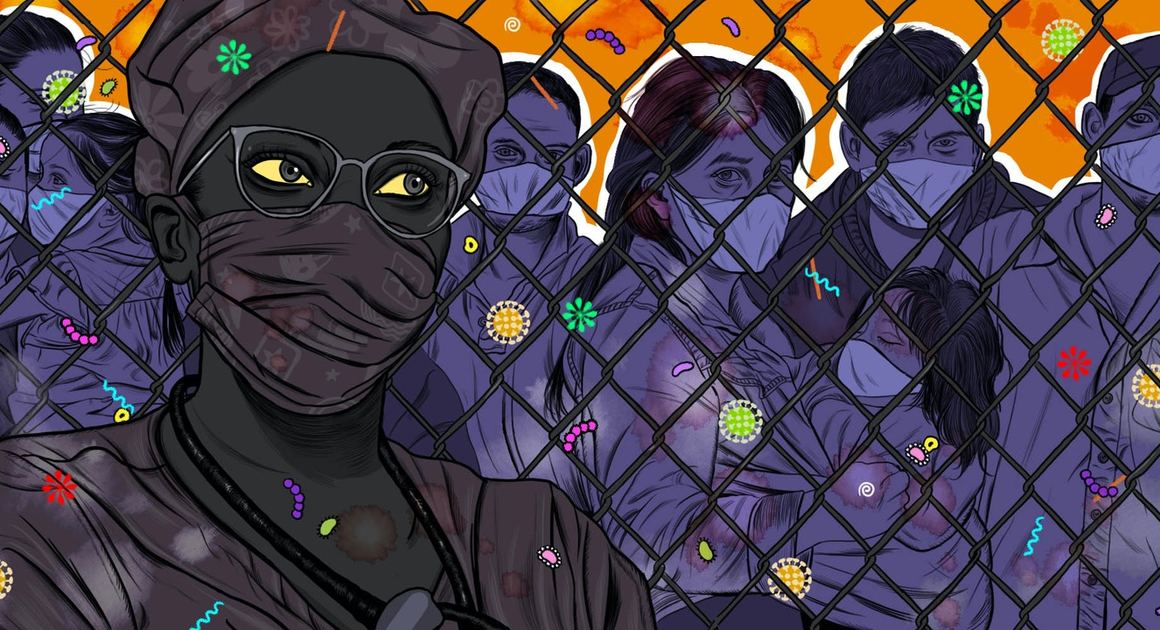 Working conditions worsen in the corrections sector during the pandemic

PSI Inter-America organized an exchange between affiliated unions that represent corrections workers in Brazil and the United States on October 20th. The event included representatives and workers from the Brazilian organizations SINDCOP and SINDPSI and the AFT from the United States.

An international delegation from the AFT visited Brasil in November 2019, a few months before the global pandemic began. Representatives participated in a public hearing at the São Paulo state legislature, participated in a seminar about the consequences or privatization in the sector, held press conferences, and visited corrections facilities in São Paulo.

This second event was an opportunity to follow up on and consolidate work that was initiated in 2019. The president of SINDCOP, Gilson Barreto reported that the threats to privatize corrections facilities in Brazil have intensified since the last exchange. Barreto said that, “despite the clear need for strong and systematic government interventions during the pandemic, the prevailing logic continues to be a minimalist state for workers and a simultaneous activist and interventionist state for the rich”.

Wayne Spence, AFT National Vice-President and President of the New York Public Employees Federation followed this up by arguing that privatization, however small, ends up creating a structural incentive to privatize more public services and increase incarceration rates. “What we see everywhere is that once you privatize, the profit model of these companies is mass incarceration, so they need more people to imprisoned. They use the profits they take from the system to lobby for measures that increase incarceration. It becomes an endless cycle. You’ve got to feed the beast.” Spence highlighted that the AFT could share strategies and research about how to limit and prevent privatization in the sector.

One of the outcomes of the 2019 exchange in Brazil that was reiterated during this seminar was the fact that every time things go wrong in both Brazil and the United States, the public sector is called on to rescue the private companies that are not equipped to deal with crises. PSI’s experience around the world demonstrates that this is also true when other public services like water and electricity, education and health services are privatized. The risks remain public while profits are privatized.

Workers in the corrections sector never had the option to work from home during the pandemic. Complicated and challenging working conditions got much worse, very quickly when COVID 19 arrived. PSI Regional Assistant for Inter-America, Euan Gibb highlighted a case from the state of Georgia that was publicized in September 2020. A local nurse named Dawn Wooten who works at the Irwin County Detention Center suffered a demotion and pay cut after revealing chronic problems that worsened dramatically during the pandemic. She works for LaSalle Corrections which runs 18 detention centers throughout the Southern United States. Wooten became a whistleblower after exposing systematic underreporting of Covid-19 cases and refusing to test symptomatic detainees, knowingly placing staff and detainees at risk of contracting the virus while actively withholding personal protective equipment from both staff and detainees, neglecting medical complaints and dismissing positive tests. Wooten was accused of ‘wasting tests’ when she requested them on behalf of detainees.

PSI’s global work in support of whistleblowers includes influencing global policy, advocating for a standard at the International Labour Organization and a European Union Directive to protect the independence of workers, control bodies and the jobs of whistleblowers. PSI supports and participates in campaigns that grow the whistleblowers movement and encourages affiliated unions to get involved.

Chris Runge, AFT’s Director of the Public Employees Division highlighted that politics matter. Runge emphasized the difference that electing a president that is more supportive of legislation and policies that support the trade union movement. An explanation of the serious threat posed by the joining of the strong anti-vaccine movement with the extreme right was offered as an alert. Fernanda Magano, President of the Psychologists’ Union of São Paulo confirmed the importance of the role of governments and the state in general. Magano reported on the systematic attacks on the Brazilian public sector at the national, state, and municipal levels. “We’re surviving a pandemic and political pandemonium; the attacks are coming from all levels simultaneously”. Finally, Magno explained how hiring freezes and widespread outsourcing are used to privatize public services without any kind of formal or overreaching process.

Finally, Jacinto Coutinho, the President of the Brazilian Association of Corrections Officers presented the work that SINDCOP and his association have done to guarantee legal recognition for corrections officers. They are working to have the sector regulated and professionalized, with a central role for trade unions in this process.