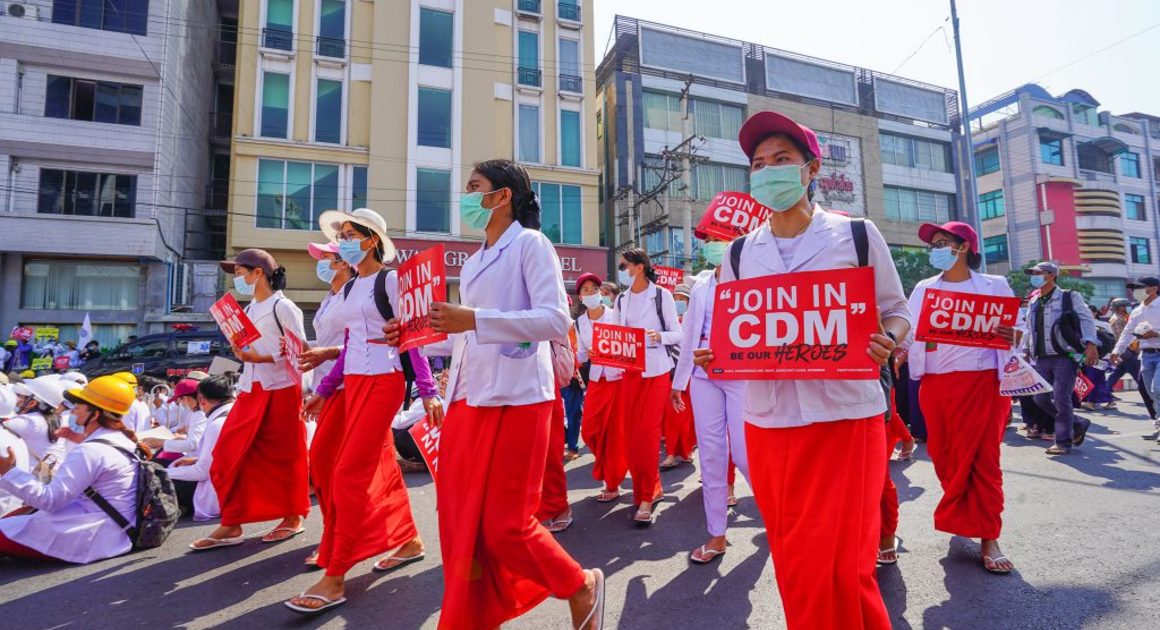 Healthcare workers continue to challenge the military regime and refuse to return to work until democracy is restored.

Tatmadaw (the military of Myanmar) continues to viciously target health workers in Myanmar who were amongst the first to strike in opposition to the military coup in February 2021. Their bravery sparked the nationwide Civil Disobedience Movement (CDM). In the past six months Myanmar has become the most unsafe place on earth for health workers, with over 250 attacks taking place this year-- almost half of the 508 worldwide tracked by the World Health Organization.[1] Over 240 doctors and 69 nurses were charged with Penal Code 505-A, some sentenced to 3 years prison. And over 457 CDM health workers are reported to have been dismissed from work.[2]

Over 457 CDM health workers are reported to have been dismissed from work.

Recently, the military has been arresting health workers without warrants and with no justifications given. On September 24, 2021, the military arrested a Kachin doctor, Dr. Zaw Htoi Aung who has been travelling around Sagaing region to provide free medical treatments to IDPs (internally displaced people) who were escaping to safety. His family has not been informed why and where he has been taken to.[3]

And on September 25, 2021, Dr. Zin Lynn, who ran a private clinic, and nurse Khin Khin Kywe, who walked out from her job at the 500-bed hospital in Yangon and joined CDM in February, were dragged out of an apartment in blindfolds, brutally tortured and shot dead by the soldiers at the foot of Myay Ni Gone flyover. The next day, the wife of Dr. Zin Lynn, who is also a doctor, was taken away by the soldiers. Dr. Zin Lynn and nurse Khin Khin Kywe were volunteering as Covid-19 frontliners in the community.[4]

Dr. Sai, who worked at a hospital in Yangon before joining CDM has been apart from his newly wed wife for months now. For safety reasons, Dr. Sai and his wife are living in different states. When he heard that the military had detained some of his colleagues, Dr. Sai and his wife changed their phone numbers and went into hiding. But, even in hiding, the doctors have been risking their lives to continue to treat patients in any ways that they could.

Dr. Sai says “People have no trust in the public hospital. So, mobile clinics and private health centres are flooded with Covid-19 patients.” Moreover, Dr. Sai formed a private online group, consisting of other CDM health workers from his trusted network, to pool their resources together to provide medical care and supplies to those who are in ethnic states. Recently, they sent water purification equipment to internally displaced people in Karenni State who urgently need safe drinking water.

"Everyone is struggling financially. I am struggling too. But we have each other. And when I heard that some of my colleagues who joined CDM are in a worse situation than me, I sent them some money and food. We have to look out for each other in this difficult time," said Dr. Sai.

A senior nurse who worked at a general hospital in Magway for over 19 years before joining CDM believes that healthcare workers on strike continue to be a critical challenge for the military regime who has been desperately trying to reopen the public and military hospitals across the country. In her own capacity, a senior nurse has been providing Covid-19 related health advice to people in her local community. And when she contracted Covid-19, her whole family also got sick, including her old-aged mother. Fortunately they all recovered. Having no regular income from the hospital and having to look after her mother on her own, she has relied on her depleting savings. "I have to live with support from others since I do not have a stable income anymore. I have to eat my savings," said the nurse. However, she is determined to hold out on her refusal to return to work until the very end and she is hopeful that it will be in the near future. "I am positive that we are going to win, and I totally believe that victory is near," said the nurse, with the sense of hope in her voice.

"I have to live with support from others since I do not have a stable income anymore. I have to eat my savings"

Dr. May, who worked at a hospital in Mon state, recounted her experience when she first joined CDM in February, “when we started participating in CDM, we were still living in the healthcare workers' government housing. But we saw military people disguised in civilian clothes hanging around at the front of the housing, throughout the day. They were constantly watching us and it felt unsafe. So, I moved out from the housing and soon afterwards in March, I heard that the soldiers seized the housing and their troops occupied the compound. I am glad I decided to move out of the housing before then-- along with my other CDM colleagues.”

Dr. May and her colleagues have spread out, some have returned to their home villages while some are still in hiding. “We know that if we return to our own villages and work there, it would be unsafe and difficult. The military appointed village heads and other non-CDM workers are keeping watch on CDM workers, it is hard for us to continue to openly operate in mobile clinics in our own village,” said the doctor. Instead, via online and phone calls, Dr. May has been advising her scattered junior colleagues on how to treat their patients and also sending them oxygen tanks and medical supplies.

“I do not know when the current political status quo will end. However, when I decided to join CDM, I had already prepared myself that I may or may not be coming back to this profession, and that I might lose my career. But I have already decided not to return to work, no matter what, until democracy is restored. My hope for my country is to have a federal governance-- where all ethnicities could live in peace and harmony and enjoy decent work and benefits in the country,” said Dr. May.

“I want to encourage my fellow healthcare workers to persist against the military's threats and pressure until we have democracy again.”

When asked whether there is anything that she would like to let the international community know, Dr. May said “I want to let the international community know how restricting and challenging it is for us CDM health workers to continue to provide care and services to the people. There is no safety guaranteed for us. We do not feel safe. Even during the Covid third wave, we are not able to operate freely to provide help to the people as much as we want. We thank you for standing with us in this difficult time. Many people need food and shelter right now. We need your support.”

Dr. Sai added a message to his fellow CDM strikers, “I want to encourage my fellow healthcare workers to persist against the military's threats and pressure until we have democracy again."

Thanks to the support of PSI affiliates who contributed to our strike fund, PSI has been able to support striking CDM health workers across several states in Myanmar.

An organiser Zinthi from one of the collective groups on the ground with an outreach to 207 health workers across the country shared that, "as an organiser, the challenge of not having adequate funding to support the CDM workers puts a great pressure on us. Every month, hundreds of CDM workers contacted us, seeking assistance. The support from PSI has enabled us to deliver the much needed support to the health workers who continue to strike on. These health workers are putting their security on the line everyday, continuing to provide medical care to civilians in whichever ways they could. Their refusal to return to work has been denying the military junta what they want- the control and legitimacy to run the country. We greatly appreciate your continued support. As the health workers persist, we must persist with them." Zinthi and her collective group has been delivering financial assistance to over 250 CDM strikers every month across the country.

* Written by Wint. Wint has been supporting the work of PSI on Myanmar campaign through coordination with workers in Myanmar. Names have been changed to protect workers.