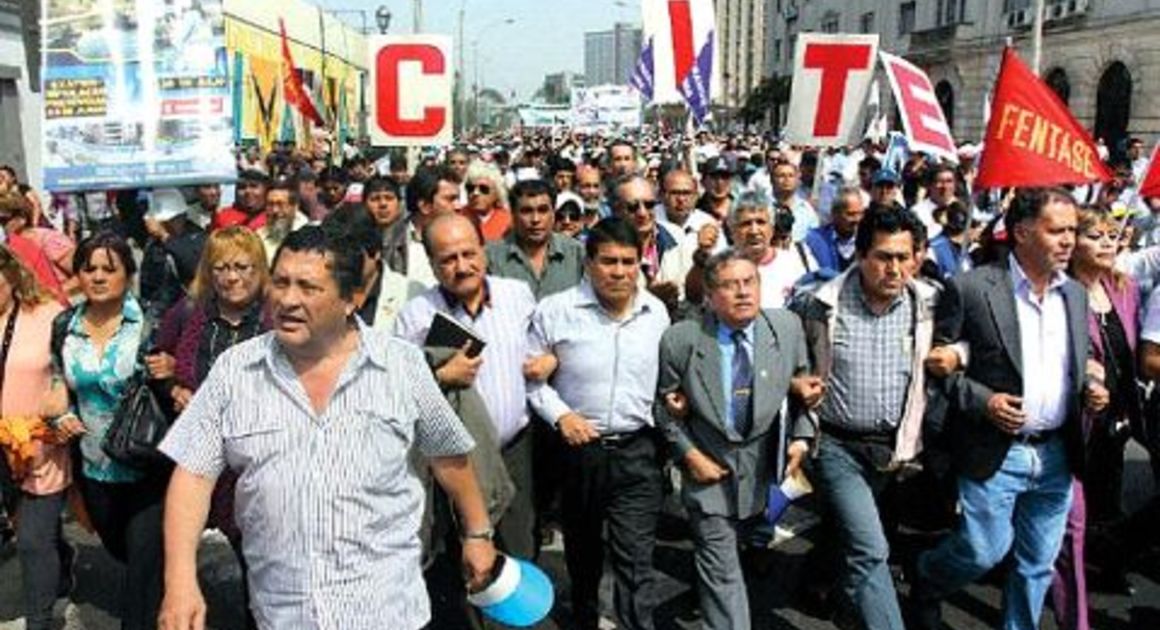 PSI supports its affiliates in PERU! Send a letter through LabourStart now!

The roundtable dialogue between unions and the government will resume on 29 August 2013. We hope that this time the government will bring these negotiations towards an acceptable conclusion for all and that it will open a new chapter in the social history of Peru.

To demonstrate international support, PSI affiliates will submit the 7000 letters of protest to the Presidency of the Council of Ministers. This is a symbolic act of national and global mobilization against the erosion of union rights for public sector workers in Peru.

The PSI document on Peru describes the current situation in the country, especially related to trade unionism. It gives information on the new Civil Service Law approved on 4 July 2013 and on how this new legislation will affect workers.

More information on Peru can be found in the Annual Survey of violations of trade union rights of the ITUC.

PSI affiliates in Peru are fighting the approval process and the final issue of the Civil Service Law 30057. This law contains serious threats to human rights including labour and trade union rights of over half a million Peruvians who provide public services to the citizens of Peru.

The new law removes the right of public sector unions to negotiate wages, determines a model of union organisation in the sector, establishes annual punitive assessments with provision for forecast layoffs, and allows for the implementation of reforms in the structure of employment and public services without any legislative consultation. The new Act denies the right of strike in essential sectors, but does not determine which sectors are essential.

PSI asks affiliates to sent letters of protest to the President of the Republic of Peru. A sample letter is available here and the English translation here.

Please send it in Spanish to the following addresses:

Or join the LabourStart campaign, here.

The unions’ National Committee, consisting of all the trade union confederations - CITE, CTE and UNASSE-, said that, despite its persistence, it has been unable to obtain any dialogue concerning Art. 3 of ILO Convention 122 , neither with the Government nor the Congress, in order to reach some level of agreement. The Committee places the responsibility for the lack of dialogue with the Government and Congress representatives. On 15 May, the National Assembly of Public Workers unanimously agreed to start a national state strike as of 29 May 2013.

The ILO sent its Technical Report to the government. It contained 136 specific observations regarding Draft No. 1846-2012-PE of the Civil Service Law, notifying that it did not abide by serious international conventions that protect the fundamental rights of workers who serve the state, and it permitted some regulatory aspects that can only be modified by Law. The fact that this contravenes national labour and trade union commitments on FTAs, generated a string of international solidarity in the world and the inclusion of the Peruvian State in the Route of Shame, a campaign held during the 102nd ILO Conference in Geneva , Switzerland that brought together trade unions from around the world and included the deposit of a petition on the matter at the Peruvian embassy.

The national strike was resumed on 6 June in the city of Lima.

On 4 July, General Confederation of Workers of Peru - CGTP and State Confederations CITE, CTE and UNASE organised a National Day of action, when hundreds of thousands of workers took to the streets across the country to protest the law.

On 19 July, PSI sent a letter to the President of Peru, Ollanta Humala, denouncing restrictions on freedom of association imposed by law and requesting the repeal of the Law. PSI welcomes the political will expressed by the Government for the installation of a dialogue process with the public sector trade unions

The General Confederation of Workers of Peru (CGTP) called for a march in Lima on 27 and 28 July to protest against the Civil Service Law. Hundreds of people marched from Plaza Dos de Mayo to the Congress.